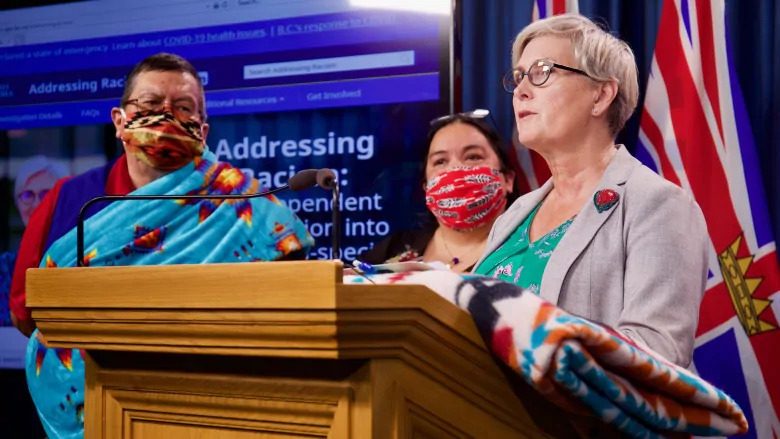 On June 19th, 2020, BC Minister of Health Adrian Dix appointed Mary Ellen Turpel-Lafond (right) to lead an investigation into allegations of racism within the province’s healthcare system. Allegations include staff playing games to guess the blood alcohol content of Indigenous patients in the ER. (Photo: Mike McArthur/CBC)

I don’t know about you, but I was not the least bit surprised to see the recent stories of alleged racism against Indigenous people in BC’s emergency rooms. Moira Wyton wrote an excellent piece in The Tyee this week on how sweeping changes are needed to fix this problem. We at the Sunshine Coast Alliance would like to add our suggestion to the laundry list of solutions we hope the Minister of Health Adrian Dix will consider.

Many years back, while working on the Downtown Eastside, I had the task – once or twice a week – of attending rounds early in the morning at Vancouver General Hospital Emergency Department on behalf of my mental health team. The general idea was to link our patients in the ER back to us at the team, either to help discharge patients back to our care or follow up on patients who might be admitted to VGH.

It was an exciting part of my job, being right out of social work school at UBC. And I would go on to work in two Toronto Emergency Departments thanks to my experience with the action-packed, frontlines camaraderie of the VGH Emergency. And I loved the humour – you had to have at least some sense of humour to work in an environment that was often so full of tragedy.

What I did not realize, because I was only there for a few hours, was the darker side of the Emergency Department humour. Once I was working in an Emergency Department full time, I realized some of the people were mostly telling “jokes” at the expense of the patients. And that these jokes were hiding deep seated, nasty, racist, sexist, homophobic worldviews.

Back in Vancouver I started my career in social services in the Downtown Eastside working in a shelter for homeless folks. It was easy to see how all the staff were white and many of homeless clients – Indigenous. Same at all the other places I worked on the Downtown Eastside – First United Church, the mental health team, and at the Emergency Department at VGH where I went for rounds.

In Toronto, I bit my tongue more than a few times when racist comments were made about Indigenous patients in the emergency department/trauma unit where I worked. I had learned the only way to have a meaningful impact with staff – and not put my job on the line – was to choose my battles carefully.

What I came to realize in my time at two busy downtown emergency departments was that no amount of “sensitivity” training or advocacy on my part was going to change the systemic racism in my corner of the healthcare system. Something more fundamental was needed.

Fast forward to today and Victoria has appointed UBC Prof Mary Ellen Turpel-Lafond to investigate racism in BC emergency departments. We on the Sunshine Coast have some ideas for structuring healthcare – in this case, senior care – in an entirely new way. We must come to the table of healthcare policy and delivery with Indigenous communities as equals. Indigenous partners must have a say and a hand in every aspect of healthcare delivery that directly affects them – not just an “Advisory Panel” or Indigenous Health Liaison Worker as some are suggesting, but by creating multi-stakeholder governance models that empower, in our case, Coast Salish communities directly.

In our model of multi-stakeholder co-operation, we want to work with Indigenous people in the running of a variety of models of elder care. Inclusive governance is about governing as equals and partners and it won’t be easy at first, we know that. The generations of colonial occupation, land theft, racism, murder, abuse and cultural genocide mean that it is very hard for Coast Salish peoples to come to the table with us as “equals” – how do you create equality when one side has all the education, connections, resources, understanding and security and the other side have only ever been “consulted” in meaningless, token gestures?

The answer lies in a co-operative model that forces a once all-powerful and dominant community to listen to partners who can say “yes” or “no” with a vote, who need to be included but who themselves will be including the people who now live on their traditional territories – included in a process of building consensus on what human care looks like.

Only when Indigenous people have a direct say in the governance and control of senior care will we be able to meaningfully end racism in at least one area of healthcare.

The SCASCC needs your help in protecting seniors. Only by coming together can we build a model of seniors care that puts seniors and their families first.
Join Us